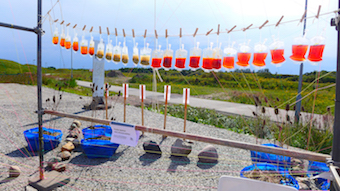 PIPE INTO THE LIQUID FUTURE. LOCATE YOURSELF WITH HOMECOOKING. Location id: HoME is a speculative cooking/feeding performance set in urban/rural farming communities in year 2030.

By year 2030, years of cross-breeding and genetic modification by the corporate operative have left the vast farmlands barren with sterile GMO seeds that fail to produce any crops. The seeds saved from biodiversity era have gone underground, cultivated in hidden tiny plots by the RESISTANCE farmers. By year 2030, the GOVERNMENT pipes out synthetic liquid food for its ‘feed the public’ program as food scarcity calls for such urgent measures. Each adult citizen is entitled 1000ml liquid food bag per day for nourishment. The food DEPOTS, built like the old style gas stations, are set up for liquid refill. The smell labs invested by the future food consortium engage themselves in producing colorful liquid food. Bearing names of old farm produces (i.e. apple, beans, carrots, dikons etc.), the liquid food strives for the ‘real taste’ of old varieties.
Rise up are troupes of RESISTANCE farmers who search the old time produce and recipes to re-create the smell of home cooking. They build themselves ultra mobile kitchens as their cooking has gone underground in opposition to the GOVERNMENT’s pipelined food supply. Cooking and moving along secret alleyways, they bring back the smell of real food and the joy of communal eating. The food conscious citizens chase the smell of home cooking. Gather around the mobile kitchens on the move, they share meal time with tales of cooking and eating, reminiscent of a long gone past.

Shu Lea Cheang is an artist, filmmaker, networker. Cheang constructs networked installation and multi-player performance in participatory impromptu mode. She drafts sci-fi narratives in her film scenario and artwork imagination. She builds social interface with transgressive plots and open network that permits public participation. Engaged in media activism for two decades (the 80s and 90s) in New York city, Cheang concluded her NYC period with a cybernoia film FRESH KILL (1994) and the first Guggenheim museum web art commission/collection BRANDON (1998-1999). Since her relocation to Eurozone in 2000, Cheang has taken up large scale installation and networked performance while co-founded several collectives to pursue cross-disciplinary projects. From homesteading cyberspace in the 90s to her current retreat to post-crash BioNet zone, Cheang takes on viral love, bio hack in her current cycle of works. In 2017, she released her third feature film, FLUIDØ, at Berlinale Berlin Film festival and is currently developing Unborn0x9, an open hardware hack project with ultrasound echo-stethoscopes and in production on Wonders Wander, a mobi-web-serial for Madrid Pride 2017.
http://mauvaiscontact.info